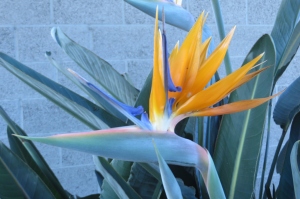 I should always see Birds of Paradise in my everyday existence.

So a concerned reader wrote and said “Don’t let the sadness of Tony stop you from blogging. Why haven’t you written again?”

Ok. Ok. This is a place for truth. I have no concerned readers. It was actually my best friend who wrote and said that.

I’m sorry to have given that impression. It wasn’t at all “the sadness of Tony” that stopped me from writing. It was, instead, a couple of other things.

1 – The sadness of Tony wasn’t really Tony’s fault. Nor was it overwhelmingly his sadness I felt. His was real and true. But what weighed on me so heavily was the town itself, the other energies and people there. Once I left, things got better instantly.

2 – It was that I’ve been quite busy. I’ve been on the move. Socializing. Seeing people and doing things. I’ve been to the Salton Sea, to San Diego, to Laguna Beach for a few days, to visit friends and their four adopted Chinese daughters in Hermosa Beach in a house bursting with activity and lined up lunch boxes every morning. I’ve been to gajillions of Museums, had dinners with friends, and wandered on beaches for hours on end watching strangers wandering on beaches, I’ve been contemplating the lives of shore birds and enjoying the weather immensely.

3 – When I left Connecticut I imagined this blog would be something awesome, something thoughtful, educational, intriguing, worth reading. And I have a couple different blog posts half way shaped in my head, but none of them are yet fully formed (read: good enough to be what I want them to be.)

4 – I’m an active Toastmaster. I’m the VP of Public Relations at my home club. I promised to keep up my social media posting duties AND more interestingly, I’ve been visiting Toastmaster Clubs in some of the cities in which I have stopped. When I do that, I write a blog post for my club blog about their club, their meeting and my visit. So when I HAVE had time to write, I’ve been doing that first. Because it’s easier to write a report than it is to write something thoughtful, and I’ve wanted to write those before the impressions fade.

But now I’m mostly caught up on Toastmaster blogging. And as of late last night I have landed at a friend’s house with some peace and quiet, no need to jump in the car to move on, nothing particular to see nearby, and he’s off at work for the next 8 hours.  So maybe I can work on this.

Oh, and if you want to see posts about Toastmaster meetings – that blog is here: Cromwell Community Toastmasters.

(I do not know these people:)

(Or these people either.)

2 thoughts on “Rainbows End Down That Highway”